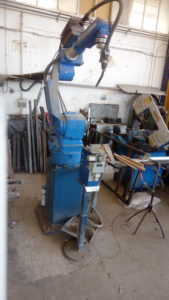 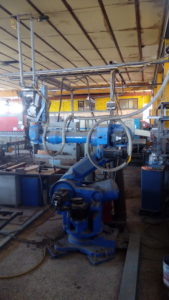 Although the science of robotics only came about in the 20thcentury, the history of human-invented automation has a much lengthier past. In fact, the ancient Greek engineer Hero of Alexandria, produced two texts,Pneumatica andAutomata, that testify to the existence of hundreds of different kinds of “wonder” machines capable of automated movement. Of course, robotics in the 20th and 21st centuries has advanced radically to include machines capable of assembling other machines and even robots that can be mistaken for human beings.

The word robotics was inadvertently coined by science fiction author Isaac Asimov in his 1941 story “Liar!” Science fiction authors throughout history have been interested in man’s capability of producing self-motivating machines and lifeforms, from the ancient Greek myth of Pygmalion to Mary Shelley’s Dr. Frankenstein and Arthur C. Clarke’s HAL 9000. Essentially, a robot is a re-programmable machine that is capable of movement in the completion of a task. Robots use special coding that differentiates them from other machines and machine tools, such as CNC. Robots have found uses in a wide variety of industries due to their robust resistance capabilities and precision function.

Many sources attest to the popularity of automatons in ancient and Medieval times. Ancient Greeks and Romans developed simple automatons for use as tools, toys, and as part of religious ceremonies. Predating modern robots in industry, the Greek God Hephaestus was supposed to have built automatons to work for him in a workshop. Unfortunately, none of the early automatons are extant.

In the Middle Ages, in both Europe and the Middle East, automatons were popular as part of clocks and religious worship. The Arab polymath Al-Jazari (1136-1206) left texts describing and illustrating his various mechanical devices, including a large elephant clock that moved and sounded at the hour, a musical robot band and a waitress automaton that served drinks. In Europe, there is an automaton monk extant that kisses the cross in its hands. Many other automata were created that showed moving animals and humanoid figures that operated on simple cam systems, but in the 18th century, automata were understood well enough and technology advanced to the point where much more complex pieces could be made. French engineer Jacques de Vaucanson is credited with creating the first successful biomechanical automaton, a human figure that plays a flute. Automata were so popular that they traveled Europe entertaining heads of state such as Frederick the Great and Napoleon Bonaparte.

The Industrial Revolution and the increased focus on mathematics, engineering and science in England in the Victorian age added to the momentum towards actual robotics. Charles Babbage (1791-1871) worked to develop the foundations of computer science in the early-to-mid nineteenth century, his most successful projects being the difference engine and the analytical engine. Although never completed due to lack of funds, these two machines laid out the basics for mechanical calculations. Others such as Ada Lovelace recognized the future possibility of computers creating images or playing music.

Automata continued to provide entertainment during the 19th century, but coterminous with this period was the development of steam-powered machines and engines that helped to make manufacturing much more efficient and quick. Factories began to employ machines to either increase work loads or precision in the production of many products.

The Twentieth Century to Today

In 1920, Karel Capek published his play R.U.R. (Rossum’s Universal Robots), which introduced the word “robot.” It was taken from an old Slavic word that meant something akin to “monotonous or forced labor.” However, it was thirty years before the first industrial robot went to work. In the 1950s, George Devol designed the Unimate, a robotic arm device that transported die castings in a General Motors plant in New Jersey, which started work in 1961. Unimation, the company Devol founded with robotic entrepreneur Joseph Engelberger, was the first robot manufacturing company. The robot was originally seen as a curiosity, to the extent that it even appeared on The Tonight Show in 1966. Soon, robotics began to develop into another tool in the industrial manufacturing arsenal.

Robotics became a burgeoning science and more money was invested. Robots spread to Japan, South Korea and many parts of Europe over the last half century, to the extent that projections for the 2011 population of industrial robots are around 1.2 million. Additionally, robots have found a place in other spheres, as toys and entertainment, military weapons, search and rescue assistants, and many other jobs. Essentially, as programming and technology improve, robots find their way into many jobs that in the past have been too dangerous, dull or impossible for humans to achieve. Indeed, robots are being launched into space to complete the next stages of extraterrestrial and extrasolar research.